I've never been all that good at 'doing' things. I'm better at talking about the thing, planning the thing and just generally procrastinating around the thing. This infuriates me no-end, but I know I'm not alone in this trait. But, if 2015 stands for anything, it's doing things. Facing fears. Stepping out of comfort zones. Just generally taking responsibility for my own life and not being complacent in my own misery/boredom/dissatisfaction.

So after over a year of talking about it, I finally did it. I got my hair cut off. For those of you that aren't aware, my hair was very long; I could almost sit on it. I had had the same very long, curly hair style since I was 13. That's 14 years of pretty much the same hair. In keeping with my low-maintenance grooming philosophy, I would get it trimmed once every 12-18 months, by the cheapest hairdresser I could find. So to cut a long story short (excuse the pun), getting the majority of my hair cut off was quite a big deal (relatively speaking).

Now those of you that do know me will know that I've never been afraid of being 'different' or going against the grain. In fact, throughout my life I've actively flouted unwritten social rules with my attitude, actions and dress. But for some reason, my hair had always, at least on the surface, conformed to the feminine ideal; impractically long, sumptuous and flowery-smelling - the binary opposite of the ideal masculine mane.

But enough of the waffle and analysis, I actually did it. Well I didn't actually do anything; a lovely hairdresser called Steve partitioned my hair into four ponytails and just chopped them off. Something that seemed so big to me was over in 10 seconds. 17 inches of 14 year-old dead skin cells lay on the hairdressers' mantel.

And that was it. Easy as pie. And I fucking loved it immediately. Which was nice.

And therein lay one of the first mighty jumps from my comfy but humdrum life-sofa onto a slightly wobbly but perfectly safe podium of newness.

And there are plenty more to come. 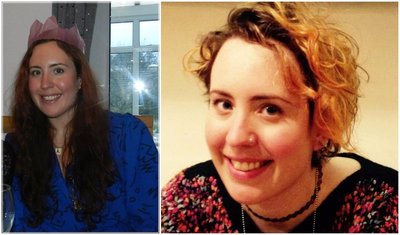